» Civics » Above the Law 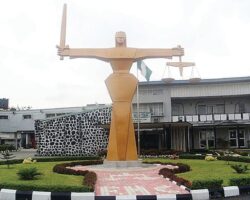 As a lifelong student of the martial arts and a movie buff, I’ve always been interested in martial arts films. One of my favorite is a 1988 action flick entitled, Above the Law, the film debut of aikido master Steven Seagal. The movie deserves attention, for its title and story that captures the symptom of our postmodern society that begs immediate intervention.

No one is above the law!

That’s the thing I’ve heard since I was a kid in school. It was one of the foundational principle of our country; our teachers told us, and the sort of thing that should distinguish our system of government from tin-pot dictatorships and authoritarian regimes we had experienced. It was supposed to be sacrosanct.

Supposed to be; but I no longer believe that’s the way it is. Just look around.

About a year ago, the acting managing director of the Niger Delta Development Commission (NDDC), slumped forward in his chair less than an hour into his session in front of a committee in the House of Representatives. The panellist put as much between the lines as they adjourned the sessions hurriedly asking that an ambulance be brought in to take the acting managing director away — cough … crook … cough — Since then, we are yet to know the outcome of the investigation and apparently no one was brought to book by the law over the alleged mismanagement of funds allocated to a development commission in the country’s oil-rich region.

The law did nothing.

But this isn’t just about politicians.

It’s also about some spiritual leader, those sexual predators who should have been jailed years ago for rape and human trafficking.

Instead, they got to victimize even more young women because a general, exemption or immunity from liability to error or failure; in particularin theological usage, the supernatural prerogative by which the Church of Christ is, by a special Divine assistance, preserved from liability to error in her definitive dogmatic teaching regarding matters of faith and morals.

But this isn’t just about #metoo, either.

It’s also about cyber crooks that  engage in fraud, money laundering and monetary tractions in property derived from specified unlawful activities in millions of dollars— and that’s only what was lost by some Americans, and doesn’t count for the ripple effects around the world. None of those guys did a day, either.

But this isn’t just about scammers’ greed in array of exotic rides.

A Lagos judge sentenced Wilson; my neighbour for many years to four years in prison — more than three years ago. He’s still out on an appeal bond while the Supreme Court tries to figure out a way to set him free.

But this isn’t just about Wilson, either.

It’s about the corrupt Nigerian justice system — a system filled with little investigators and prosecutors who find it’s easy to make cases against the poor while ignoring crimes committed by the rich and powerful.

But this isn’t just about weak-willed bureaucrats.

It’s about The Nigerian Police Force (NPF) who is often responsible for hundreds of extrajudicial executions, other unlawful killings and enforced disappearances every year. The majority of cases go uninvestigated and unpunished. The families of the victims usually have no recourse to justice or redress. Many do not even get to find out what exactly happened to their loved ones.

And yet, the perpetuators haven’t spent a day behind bars.

This isn’t cynicism. It’s not  my imagination.

Things really are different now, our justice system is supposed to send a message: to the lawful and the lawless, alike.

We’re sending a message, alright. Just not the right one.

Plenty of people are above the law.

Just not you and me. It’s time to puncture the myth we learned in high school civics. Lots of people are above the law.

Like a cancer invading the human body, it appears that more and more people, especially those who occupy responsible positions in both government and major corporations, believe and act like they are above the law. The culture of corruption that accompanies this insidious disease must be stopped “stat” and should never be tolerated. We shouldn’t feel above the law in any way. Be it breaking civil offenses like not wearing face masks at public gatherings,  zoning regulations, licensing requirements, traffic violation, illegal waste disposal and all sort of other things or engaging in  criminal  offense. We shouldn’t feel – that the rules that apply to others do not apply to me. – “exception-making.” Breaking the simplest of the law is an offence and should be avoided.  One of the features of a civilised society is laws or the rules and regulations which are in function for the smooth functioning of the society. A good knowledge as to why we need to follow and respect laws is very crucial for development of our society, we must know the adverse effects if we don’t comply with the set rules. These rules are in place so as to ensure harmony for all of us together, and if we don’t comply then it results in chaos.

8 thoughts on “Above the Law”