» Education » Heroic Of An Orphan – The Sun Newspaper Book Review 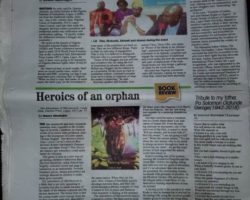 The late nineteenth and early twentieth centuries were regarded as the Golden Age of Juvenile Literature, as classial works of juvenilia were produced, leading to the emergence of a new canon. Thomas Hughes’ Tom Brown’s School Days, Lewis Carrol’s Alice in Wonderland, Robert Stevenson’s Treasure Island and Mark Twain’s Tom Sawyer are classic any shoolboy could easily barter for lollypop

This genre is seen as a new way of governing children’s behaviour than physical displine, using didacticism brightly coloured covers and page illustrations as an enticement. Juvenile literature (prose, drama and poetry) are writings directed at children to make them grow joyously.

The Adventures of Ofarimerechi is a fable that is not ony appealing to juveniles but also to adults because of the depth of the theme explored and the diction deployed. The bonus here is that the young reader must emerge from the reading exercise with rich, descriptive poetic language in his repertoire

The dominant theme in the book are bastiality and the tragedy of war and their overreaching consequences on every creature. Man has built beautiful cities, fancy cars, among other scientific innovation for himself, yet he has continued to make life miserable for animals in the bush, hunting them fir games and klling them for mischief. The author is worried by the descration of the ecosystem by man.

The two major charactees in the book Ofarimerechi (an 8-year-old boy) and Kudu (the talking antelope) are hard done by. While Ofa is orphaned by the war, Kudu is separated from the herd due to the same reason. When they run into each other, a bond of friendship quickly develops between them and their lifestyle becomes a shining example of what it means to live in peace and harmony – what humanity is lacking at the moment

The Adventures of Ofarimerechi enjoys a narrative combo: the third person point of view and the first person are weaved in the narrative. The story begins with the third person – “Once in the eastern village of Ogbunike, northeast of the Niger…” -and alternates with the first person narrative when the Talking Kudu begins to tell his own story: “I galloped desperately beneath the gleam of the evening…”

All through this titillating tale, the atmosphere switches between dark forebodings, unease and joy. We are told, from the begining of the story of Ofa liing in a workd that apprars to him to be like a netherworld; the grass is no longer growing due ti aerial bombardments for three years (the Nigerian Civil War?). From his hideout, “the sky was being torn asunder by a spinning thunderous tremor”

Our hero soon becomes a waderer lost in a forest where there is no indication of human life. Even the panting antelope he encounters, one of the suurvivors of the blitz, is scared to death: “Kill me already, and be over with it!” But Ofa swears. “I am not going to kill you.” When the animal returns, “you are about the only human who is not about to plunge an arrow through my back or sword into my chest”, we get the exact picture of how anguished the animal world feels about us.

Kudu’s exciting tale of his journey – meeting the wonderful pangoline and the Great Moa – tickles the orphan, filling him with awe and the spirit of adventure, and it’s an adventure that cuts across the grassland, the intoxicating Guinea Savannah with the glimpses of paradise. At the Mystical Garden, Ofa apoligises ti the elegant latite (Great Moa) for the destructive hunting expeditions of man on animals.

A turning point in the narrative is when Kudu us shot by hunters but is revived by the daring Ofa, using the mystical golden feather given to him by the Great Moa. Aside swelling the vocabulary of the young reader, The Adventure of Ofarimerechi offers invaluable geographical lessons on our flora and fauna. Names of different plants and animals and their peculiar habitats are worked into the tale, as the levitating physical setting of Enugu and the realm of fantasy commingle in a masterly disinvention of time and space. We  have the magic tree, the mystical garden, among others.

A page-turner makes you feel hunky-dory, yes. That’s what Linda Etuk’s juvenilia does to you. This is the type of story book that ought to be in the school curriculum.