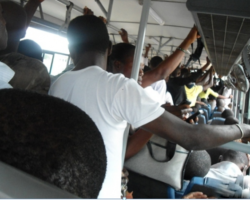 It’s scary, complex and overwhelming to respond when you’re sexually assaulted on public transit — even when you thought you’d be prepared.

Ovie had to push and shove to get into the bus. She kept her sight on the goal which was the slightly-opened door. She couldn’t see if she was going to bump into the bus or crash into a person.  When she finally got to the entrance, she took a step in to find out that all the seats were taken. She was left with the standing option. Before she could make up her mind on what to do next, she was trapped in an endless sea of people trooping in.

The bus aisle was filled with lots of people. They rubbed shoulders never minding that their toes were often trodden on or that they were in closer proximity to strangers. Ovie felt claustrophobic.

“Ogbeni move in! Space dey for back,” the bus attendant yelled. Some people protested. There was noise everywhere; Someone’s cell phone was ringing, a child wailing who probably lost his mum in the overcrowded bus, two people fighting angrily over one of them pushing the other. It was a chaotic and extremely hot. Sweat was trickling down everyone’s face. A disgusting odour hung in the air. Ovie felt very uncomfortable. She couldn’t wait to get off the bus. Unfortunately her bus stop was not in sight.

The bus rocked from side to side as they traveled the familiar Lagos roads not affording Ovie’s brain the time to daydream or rest. The bus was filled with people of different kinds; there were those who chattered, their voices rising and blending together in the sweet ritual of friendship. Some absorb themselves in music; others drift into worries that will erase themselves on arrival, when their body rejoins the world of moving and speaking to others. And so the journey continued – people were clogged together yet they seemed separate; feeling all the same turns and bumps.

The bus attendant called out the next stop. A young woman and her three children were alighting so Ovie had to make room. She moved slightly towards the door. She then stepped back to let the doors close. Just then a man put his hands on her back and pushed her into the people on the bus to quickly get in. The door closed behind him and Ovie was crammed between him and another man. She had nothing to hold on to so she put her right hand on the ceiling. Ovie tried to reposition herself so she wouldn’t be touching anyone else. Slowly she started to feel a tingle behind her, something hard was pushing against her butt. She tried to look behind her, but all she could see was a man, older, dark suit, about her height- out of the corner of her eye. His coat was hanging on his left shoulder and his hand and arm were hidden. She thought, “Maybe he has a broken arm. Maybe that’s what’s hitting me.” But she knew… she knew what was pushing into the back of her skirt.

The doors opened at Cement Bustop, and people started to shift around. Ovie moved, so her side was facing this man. As the doors closed and the bus pulled away, Ovie felt that hard object again digging into her leg. She tried to look down, afraid of what she was going to see. She could see his hand moving around in his pants. She stuck her elbow out and into his abdomen to keep him farther away. He just pushed harder. She thought, “No, Ovie! You know what to do!” She started darting her eyes around the bus, silently begging someone to help. No one looked at her. They arrived at Sawmill bus-stop and as the door opened she jumped out of the bus. She was ready to run, but the man followed her out. Ovie tried to make eye contact with him, but he just kept walking. Ovie jumped back in the bus. She held it together until she got her final stop. As soon as door closed Ovie burst into tears; her entire body seemed to sag with exhaustion and numbed sadness that she was for some minutes a pleasurable toy used to excite a man’s sexual abnormality.