» Life » I was raped, and I enjoyed it! Does that change his crime? 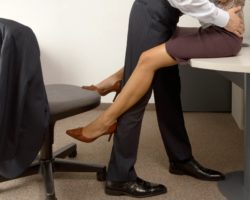 Yesterday was my first day in a company in Victoria Island. I felt uneasy, timid and shy around my new boss. It was extremely nerve racking, because I had distinct feeling that I’d been hired for my looks and slightly flirtatious nature. It wasn’t as if I didn’t have the qualification for the marketing position, but I’d found in the past that flirting a bit with a male boss could make the job much more enjoyable. Mr Adesola Albert- Adesanya, had been more than receptive to it, and by the time my interview was over and he offered me the position, I had the feeling that it wasn’t going to be a relationship of just professional exchanges.

When I walked in an hour early on my first day, I found out just how right I‘d been about that notion.  I guess it makes it kind of strange that the very first memory I have of my first day was how easy it was for Mr Albert  to get me undressed, compared to how long it had taken me to get ready. I was surprised he didn’t end up popping buttons off my blouse. Instead, he moved quickly and methodically as his tongue pushed past my lips and dipped into my mouth. He took no more time to get my pencil skirt off, unbuttoning and unzipping it before letting it pool at my feet as well. So there I was less than an hour and  a half  on the first day of my new job, and a my boss had me standing in nothing but my black lacy bra and my  tiny little panties I’d specifically worn to eliminate a panty-line. His mouth kept up with the aggressive kisses; an act I found awkward and I thought I wasn’t enjoying. Under the circumstances, I was somehow incredibly turned on.

Suddenly I was in front of a growing bulge in his pants. He forcefully grabbed my hand and placed my right palm on it. I was taken aback. I was terrified. I immediately pushed away; it was bigger in flesh than it had hidden in the fabric. I began to protest. He pushed my head into it; holding my neck tightly. I gasped, my mouth opened. And with my mouth open, he pulled me forward and his cock slammed past my lips. Slammed isn’t an exaggeration either, because he wasn’t gentle with it at all. He simply shoved himself in, sliding all the way back to my throat, and I gagged violently. I struggled consistently then he pulled me back a little to allow me to catch a breath before he jammed himself back in again. It was far rougher than I was used to, and I don’t know if it is because it was my boss that I ended up enjoying the way that he was taking control, but as much as I never would’ve expected to like what was happening. I did.

Every time he pushed forward, I gagged, and then he’d pull back and push forward again. It was a never- ending cycle of him holding my head firmly, making me gag, releasing me, holding me again, and making me gag again. And I knew he enjoyed my gagging because I felt his dick pulse against my tongue every time I did. I think under ordinary circumstances, I would have felt horribly used and objectified. Hell, I had an advanced degree in communications and marketing, yet here I was on my knees like some kind of paid hooker who had to fuck and suck her way to the top.

Finally he turned me around and shoved his enormous dick into my asshole. I knocked his phone right off his desk, but he didn’t slow down. I knocked the pencil cup he had on his desk over, scattering pens and paperclips all over the floor, and that didn’t slow him down either. I screamed. The invasion of my tightest and tiniest asshole brought so much pain and discomfort that I cried out. Finally he pulled his dick out of my poor little abused asshole.  He took a step back; as he reached for his shirt, I took the cue from him to redress myself. I scrabbled around the office, collecting my skirt and blouse from where they’d gotten kicked off to, throwing them back onto my body and trying to straighten them up presentably.

“So,” Mr Albert said finally as he smoothed his tie. He looked as if nothing had happened. His hair was still impeccably styled, his eyes calm, his clothing free from wrinkles and fuzz. I, on the other hand, felt completely ambivalent about what had just happened.

“I think you’re going to fit in here beautifully”

I lifted my eyes to his, and for the briefest of seconds, I saw a suggestive twinkle winking back at me. A small smile curled at the edge of my lips as I replied, “I agree, sir.”

11 thoughts on “I was raped, and I enjoyed it! Does that change his crime?”