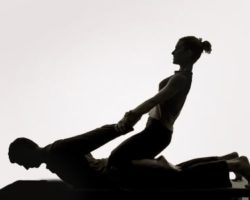 I am going to tell this story because my husband Ugokwe Uzoma has told this same story ten times over. It has become a story to tell to lighten up any room. And he’d bite the edge of a smile to start the story; in a vain attempt to keep his creeping grin at bay. The intention behind his perking lips isn’t something that could easily be ensured. But today it’s my story to tell.

We were in Bangkok for a holiday trip after several persuasions from me that we needed to take some time off the family business. It was a humid afternoon, so we decided to treat ourselves to a satisfying lunch. After walking around some of the street markets, we decided to go for a traditional Thai massage. I was ready to take solace from the stresses of modern life in an exciting and powerful mind/body healing experience. The massage parlor was an open concept; consisting of two huge communal halls, one side for males and the other for females, with a walkway in the middle. There were no rooms or curtains, and the massages were performed on mats.

We changed into the garments provided by the spa – loose cotton tops and baggy drawstring pants. My husband was very uncomfortable with the idea of another man touching my body but he was ok with the lady therapist for himself. A five minutes argument began and again I was able to convince my husband that it wasn’t a big deal. I was not taking my garment off because it was a Thai massage.

“Unlike most massage modalities that utilize massage oils and require you to disrobe and climb under a sheet on a massage table, Thai massage is performed while you are fully clothed, usually on a padded mat on the floor.” I explained.

“Are you sure? Isn’t it same as the ones we see in movies?” he asked.

“Relax, dim oma (my dearest husband) Even if… there are strict protocols for draping during massages. I began to praise him with some fancy Igbo titles to help me win this war and it worked. At the sound of “Odu’m” (my lion) he agreed with a little smile

“Please don’t fail to alert me when….” I cut him short.

“Nothing out of the ordinary would happen – my love,” I reaffirmed him.

The therapist noticed we were arguing and offered him a space by my side. I was so glad he did. Our massage began simultaneously. We were beginning to enjoy the relaxing atmosphere in the room —soft spa music was playing in the background, a trickling waterfall perched in the corner, and the sweet smells of lemongrass and jasmine wafted in the air. My husband laid still enjoying his incredibly relaxing rub down of his neck and shoulders while I was battling something different.

He became fully alert when his masseuse stretched and bent his knees and arms at awkward angles. She grabbed his hands from behind and positions her knee behind his back; sketching his muscles to relieve tension and enhance flexibility instead of the relaxing gliding and kneading motions he was expecting.

Halfway through my own massage, I felt a huge fart coming. I held it in for what felt like forever, until my entire body stiffened up and I felt as if I was turning blue. My therapist, thinking that my stiffness meant that I needed more loosening up, proceeded to stretch my body with renewed zest, basically forcing all the air out. Against my will, I let rip the loudest fart which echoed in the open halls, every other person on the other side heard it loud and clear.

There was a stunned silence for five seconds then everyone burst out laughing in surprise (and disgust, I’m sure). My husband who was beside me screamed with laughter and announced that the fart came from me. After we left Thai my husband replayed the scenario constantly about eating Thai food and going for Thai massage; it became the climax of our travel experience.