» Life » My Journey as a Single Dad 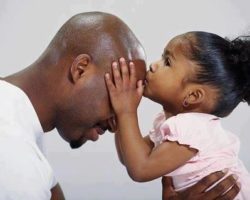 In April 1997, I lost the love of my life; I was forced to cope with not only her death, but the death of my newborn son, it was a tragic Thursday in Trans–Ekulu, in the coal city of Enugu. My name is Chinwuba Nchedo, I was fondly called Chuchu by my late wife. I was left with the responsibility of raising our 4-year-old daughter alone. After the shock of my wife’s death, I became aware that I knew nothing about raising a daughter by myself.

During the grieving process, I sometimes wondered if the wrong parent had died. “Mothers raise daughters. Fathers are supposed to financially support the family,” I often thought. I was brought up in a patriarchal Igbo family where mothers were the only nurturers. I grew up as an only son among five sisters. Now, I had to learn a new role, one I hadn’t anticipated.

My daughter’s greatest fear initially was being left alone. She had already lost her mother. She didn’t want to lose her father as well? Who would take care of her then?

On one occasion she announced, “Dad, I know what you can get me for my next birthday present, and it won’t cost you one naira. You can find me a new mum.” It was too soon for me to consider taking such a step, but her question helped me to understand the depth of her need. She was hurting and she was scared.

After the initial shock, denial and bargaining phases had run their courses; I went through lingering anger and depression then I started to put our lives back together. For the first few months I sucked at been a single parent.  I failed at every attempt to make a meal. I consecutively burnt our dinner until I got my youngest sister; Ndidi to come over fortnightly to help me out with cooking, shopping and cleaning of some sort. She was a student at Enugu State University of Science and Technology at the time. She was very helpful and supportive although she benefited largely from the gratuity she received.

I am an architect. I have a Master’s degree and have been working a professional job in my field for eleven-and-a-half years.  Although I was passionate about my career and loved my job at Fusion & Fealty, I knew I’d to be part of my daughter’s life. Not just providing for her, but being actively involved in her life as she grows.

I worked for 48 hours a week, I often found myself torn. It was difficult to juggle work life and raising my little girl.  In August that same year, I resigned my job and started out my private practice. I had time to drop off and pick up my daughter from school.  I also took up cooking lessons from my sisters. My daughter and I did life together; doing dishes, tidying up, solving math sums and visiting fun places.  I became my daughter’s “go to person”. I encouraged her involvement in church activities so she would be spiritually grounded. I enrolled her in charm school and we joined a sport club in New Haven to foster her swimming and tennis skills.

For regular exposure, we visited our home town Ezeagu. It is renowned for its undulating plateaus, rich cultural diversity and scenic views. My daughter always loved it there. Her favourite site is the 30 meter high waterfall in Ezeagu complex and the 3-kilometre cave, as well as the lake, the cold and warm spring. Ezeagu Tourist Complex is our perfect place for picnics and several leisure activities. I tried to be involved by balancing my work and caring for my daughter.

So many memories: her first real date, graduations, tennis games at the arena, the first formal dance, her first ball dress, visits to the saloon, learning how to ride a bike, her cultural dancing. These are memories I hold so dear. One of my fondest recollections was…

On a certain morning, my daughter was taking longer than usual to get ready for school and we were running late. I went up to her room.

“Knock, knock, sweetheart are you ok? “  I asked from behind the bathroom door.

“It is so weird dad; I think I am really sick. I am pooing blood. And my tummy badly hurts.  Am I going to die like mum?”

For a few seconds I was numb. I wanted to freak out but I had to stay calm.

“What part of your bum is bleeding hon?”  I asked.

“Is it the poo part or the pee part?”

“I guess it’s my pee bum,” she answered.

Ok, sweet heart. “Wash up nicely with water and soap. Then stuff toilet paper in the back of your pants and come out of the bathroom.”  I had an idea of what it could be.

She did as she was told. When she got out, I gave her a warm hug. I confirmed from her stained underwear that it was her first period. Then I began to explain the menstrual process to my little angel in my best way possible. I also reassured her she wasn’t dying. She was so happy and relieved even though her tummy did hurt.

We drove to the pharmacy to get her sanitary towel and some pain relief for the cramping. While in the car, I answered several other questions and clarified her assumptions.  I was so excited I was part of my daughter’s big day and that I got to be there for her.

My daughter went on to joke that she deserved a treat like when her tooth falls out, so I decided to oblige her with the Igbo puberty celebration.

We skipped school for that day; I nipped to the market to get fresh scent leaves (Nchawun) and a life local fowl to be used for chicken soup. It was a meal offering for my daughter – celebrating her womanhood and her advancement into adolescence as it is in our Igbo tradition. I never missed an opportunity to teach my daughter our rich cultural heritage.

My daughter is 23 years old now. Like any parent, I didn’t know it would turn out this great, until it did. I learnt this: Ultimately, the best gift I could give my daughter was my time, my love and my encouragement. Daughters need their fathers; one doesn’t have to lose his wife to be an active dad.

20 thoughts on “My Journey as a Single Dad”