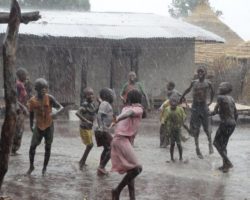 You know you are in Lagos when clouds begin forming and winds start blowing with people running helter skelter – depicting signs of rainfall; unannounced rainfall mostly show up when everyone is busy going about their business.

It was about 1pm.  The street was filled with children in white-gray uniforms on their way home from school. They walked in pairs chatting, giggling and playing by the road side. The sky darkened with thick clouds. Most people picked up their pace, while some ran hastily holding futile hands skyward to fend off the worst. Onyeka quickly got on a motorcycle to take him to his mother’s shop in front of their house. The rain began to fall so thickly that there was an instant covering of water on the street; the city was cast into somber tones.  The roads were turned into small rivulets and street children were splashing and playing in the muddy, dirty puddles. The motorcycle driver slowed down; thick sheets of rain obscured the driver’s vision. He held the handlebar firmly as they lumbered pass; the saddle clattered as the wheels sloshed through the muddy potholes.

The downpour was so heavy that they were drenched to their skin. The sound of emptiness was disrupted by the loud gregarious boom of thunder. The cold rain pierced Onyeka’s pale and wet skin. He hopped off the motorcycle as he handed the driver a wet fifty naira note. He ran across the slippery path into his mummy’s shop.

His mother and his elder sister Adaobi had already covered their wares with large polythene materials to prevent water from destroying them.

“Welcome son, go inside and quickly join your sister in filling up all the barrels.”

“Make sure you take off your wet uni…“ Onyeka was already gone before she finished.

All the children in the compound had come out with buckets to fetch water from the rain. They took turns under the roof top gutter channel – each person placed a bucket at the funnel- like faucet and watched the water gush into the bucket. When a bucket was full, the child carried the bucket of water into the house to fill up the storage containers. It was a lot of work and it required patience. Onyeka and his friends enjoyed this chore because it was a good excuse to jump in various puddles with their arms open wide and water running freely down their faces and already soaked clothes.

While Onyeka waited his turn, he joined his friends to dance to the beats and strums of the rain; each boy was out to show his unique afopop dance steps. One of the boys planted one leg while twisting the other leg on the ball of his foot to the beat. Once his basic stance was established, he added ridiculous hand motions and facial expressions to display his azonto dance skills. Everyone hailed him. There were various dance moves as the rain pattered. Ada also came out to shake her backside leaning forward with locked knees and lifting each leg up and down to initiate the kukere dance pattern. Her arms were in freestyle movements. It was becoming a rain dance battle. Another boy seemed to be the shoki master; his leg movement and the violent shaking of his head, biting his fingers and contorting his face into wild expressions earned him the master title. Everyone was excited. The wind howled as the water splashed in a repeated rhythm.

Onyeka in the excitement began a backwards rolling of his shoulders with one arm continually extended and the other arm placed either on his waist and alternatively on his chest in a Skelewu movement – he tried to add a leg movement when he missed his step. He slipped, and fell hard on his back. As he hit the ground with a “thud,” at first he was just shocked. The children screamed and a thunder rumbled. Adaobi ran to his side. Then the shock turned to horrible pain, stinging his back and side. He realized he’d been badly injured because he couldn’t get up. There were several failed attempt to get him back on his feet.

Onyeka was rushed to a nearby hospital but was immediately transferred to The National Orthopedic Hospital, Igbobi. He saw two different chiropractors, both of whom told his parents he’d seriously injured his back and may need surgery. In the meantime, he was given a bed in Igbobi. He was always lying on his back for it hurt too much to sit upright. Onyeka remained optimistic about his recovery. He told everyone who cared to listen how he would be going back to school soon and how much fun it will be to dance at his birthday party in October. His mum enjoyed listening to his enlarged horizon of hope; it made her smile but she didn’t want to spoil his happiness. She knew they needed a miracle for Onyeka to walk again. The doctors were still evasive about his prognosis. The only sure truth was that Onyeka needed surgery and physical therapy afterward which cost a lot of money that his family couldn’t afford.